Thank you again for your support in our fight for real democracy. We’ll have an exciting update soon on our struggle with the FEC, where our demand for fair public funding for third party candidates and independents will soon have its day in court!Meanwhile, the need for independent, non-corporate politics was writ large last week, as the most dangerous crises we face – and the solutions needed to solve them – were missing in action in the midterm election dialogue. Except for third parties and independents, the US-Russia proxy war and the climate emergency were scarcely mentioned.

The stranglehold of big money over that election is now emerging as deadlier than ever. When final reports are in, federal candidates and committee spending are expected to total nearly $9 billion, well over the $7 billion record of 2018. Moreover, a bigger chunk of that money than ever – $2 billion – is coming in as “outside spending”, mainly from superPACs, which have no contribution limits. (All per opensecrets.org.) This enables corporations and the superrich to influence elections and candidates more than ever. Which goes a long way to explain why critical issues like war and climate change  are shut out of our elections.

As a case in point, the five most contested Senate races were dominated by superPAC money. In other words, corporations and the super rich gave the actual majority of money spent on the most contested, consequential races (specifically in PA, GA, AZ, WI, NV).

The bottom line: We need to get the big money out and put the people back into our elections. This is the overarching purpose of our fight with the FEC, as we attempt to hold the line for the last vestiges of our public financing system!

While our elections shed no light on the dangerous, destabilizing war in Ukraine, here’s a conference that will. I have the honor of speaking here, along with Jeremy Corbyn, Vijay Prashad, Medea Benjamin, Brian Becker and other powerful voices for peace and justice.  If you’d like a hefty dose of empowerment for peace, join us in person in NYC or by zoom this Saturday, 11/19. Details below.

In gratitude and solidarity,, 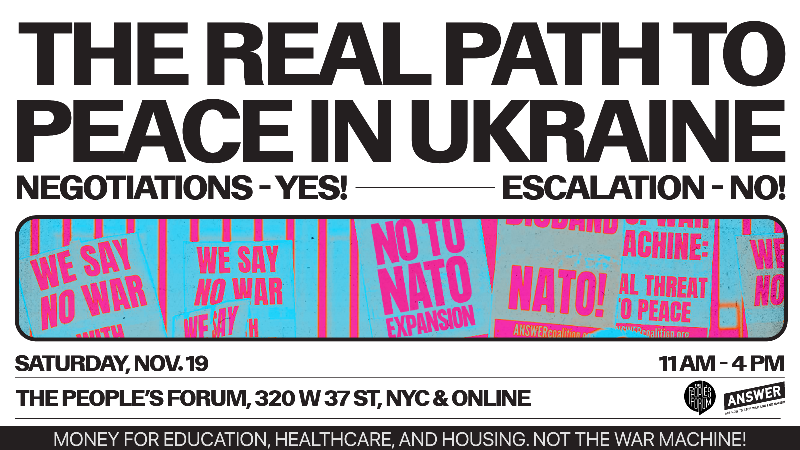